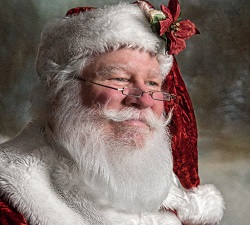 Yes, I really did live in North Pole Alaska!  I graduated from North Pole Jr./Sr. High School (they have long since dropped the Jr./Sr.) .  My graduating class had 16 people in it, but fewer than that actually showed up.  We exited the stage (yes, with our diplomas) to the movie theme music, by the same name, The Sting (you know, Robert Redford).  I spent a year at the University of Alaska, Fairbanks, and got my degree in Aerospace Engineering from the University of Arizona (so yes, I do know how to make Reindeer and a sleigh fly).

I've heard tale of mosquitoes attacking unwary drivers going down the Alcan highway.  They would riddle a truck and camper with holes until they could get a good hold of it, and then take it to their lair!  Moose were know to be captured and carried away as well.  Remember, everything is bigger in Alaska, even the tall tales.

I used to work at what was then called the Star of the North Bakery and Cafe.  I made the donuts!  The Alaskan glazed were cut out with a coffee can, so you can imagine how big those were (it's true!).